Click to read "Virginia Inmate Survives Serious Bout With COVID-19, Credits Prison With Recovery"
Click to read an Open Letter from the Virginia Association of Criminal Justice Educators Board- June 25, 2020
VCA Annual Training Institute will NOT be held at a LIVE VENUE in
October 2020
We are finalizing plans for a VIRTUAL Business Meeting
as required by our Constitution and Bylaws

​Congratulations to the Newlyweds!
On August 28, 2020, VCA President Michael Eaves was wed to Jarrell Singleton-Eaves. The Bride is a Captain in the United States Army Military Police. We wish the Newly Weds all the best.

"James H. Adams, Jr., is the Assistant Officer in Charge and Technical Director at Naval Consolidated Brig Chesapeake.
Born in Moultrie, Georgia, Mr. Adams enlisted in the Marine Corps in 1981. He served as a Military Policeman until 1989 when he was selected to be a Drill Instructor. In 1990, he was assigned as a Corrections Officer.

Over the next 14 years, Mr. Adams served as a Supervisor in each facet of corrections. Because of his unique background, he was selected to support Operations United Shield (Evacuation of the United Nations Forces from Somalia) and Emerald Express (Demonstration for the SECDEF and Congress of the technology and techniques used in the evacuation). He was then ordered to Headquarters Marine Corps as the Operations Officer and later Deputy Director of Marine Corps Corrections. His last assignment was to the Base Brig at Camp Lejeune where he served as the Brig Officer (Deputy Warden), and Commanding Officer (Warden) until his retirement. After retirement from the Marine Corps, he was hired by the Department of the Navy Corrections as their Western Region Inspector and soon took over as the Operations Officer. He was promoted to his current assignment in 2011.

Mr. Adams has a BAAS degree from Texas State University and MA degrees in management and security management from Webster University. He is an ACA Auditor and a Certified Jail Manager (CJM).

He and his wife, Yolanda, have a son, Jonathan, and a daughter, Alisha."

In receiving the award, Jim said, "One of my greatest aspirations and goals has always been to lead, be a positive role model, and teach those young 'hard chargers' who work with me each day. I strive to be a leader who made a positive contribution to the next generation  of corrections leaders. This is my promise to them and to the AJA as I represent them as the Correctional Administrator of the Year. Thank you."
​Virginia’s Recidivism Rate Falls Even Lower, Remains the Lowest in the Country
February 03, 2020
RICHMOND — For the fourth consecutive year, Virginia has the lowest recidivism rate in the country. The newly announced rate of 23.1 percent is down slightly from last year, when Virginia posted a rate of 23.4 percent.

For the first time since Virginia topped the list for the lowest recidivism rate in the country, there is a tie for that top place, as South Carolina appears to have also achieved a 23.1 percent recidivism rate.

Virginia’s recidivism rate remains the lowest among the 42 states that report 3-year recidivism rates by tallying the number of offenders re-incarcerated within three years of their release from prison.

“The heart of the mission of the Department of Corrections is public safety,” said Secretary of Public Safety and Homeland Security Brian Moran. “Today, offenders are reentering society more prepared than ever to lead productive lives. Since Director Harold Clarke’s arrival in 2010, we have witnessed a significant and continuing culture shift in the Department of Corrections, where reentry preparation now starts on day one of incarceration.”

Contributing to Virginia’s leading rate are the effective re-entry services, educational programming, and treatment offered in VADOC facilities as well as effective supervision by VADOC probation and parole officers in the community post-release. The VADOC tailors its programming and supervision to address each offender’s criminogenic risks and needs.

“Our success is the result of the collaborative efforts and incredibly hard work of our dedicated staff, community partners, and the returning citizens themselves,” said Virginia Department of Corrections Director Harold Clarke. “When incarcerated men and women successfully reintegrate into society, everyone benefits – the Commonwealth, our communities, and the families – especially the children – of those returning home. We appreciate the support we receive from Secretary Moran, Governor Northam, and the legislature. We wouldn’t see this success without the resources they have dedicated to public safety.”

Of the 12,385 state responsible offenders released from incarceration in Virginia in fiscal year 2015, 2,862 were re-incarcerated within three years. Virginia waits at least four years to calculate the 3-year re-incarceration rate to ensure all court orders are accounted for. All state responsible sentences after release are counted as recidivism in Virginia, including technical violations and sentences for offenses that occurred prior to release.
More information can be found on www.vadoc.virginia.gov. 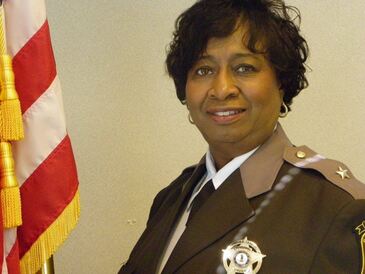 From The Petersburg Chamber of Commerce, March 9, 2020
Past VCA President Vanessa Crawford Receives Award
The Petersburg Chamber of Commerce is thrilled to announce Sheriff Vanessa Reese Crawford as this year’s winner of the Dr. F. Nathaniel Gatlin Award. This award will be presented at our Annual Dinner & Meeting on March 19, 2020 at the VSU Multi Purpose Center. For tickets and information, please visit: http://petersburgchamber.chambermaster.com/…/2020-annual-me…

Role model, leader, accomplished, faithful, dedicated, inspiring, philanthropic – these are just a few of the words used by the community, peers, and others to describe Sheriff Vanessa Reese Crawford. She has dedicated her entire life to bettering her community, be it through her work or in her volunteerism.  Here are just some of Sheriff Crawford’s accomplishments. Please join us in congratulating Sheriff Crawford! We are so lucky to have such a person in our amazing city of Petersburg!

• First Female to run all male facility in the Virginia Department of Corrections, Retired with over 28 years of service. — From 2014 until 2017, only African American Female Sheriff in the United States.
— Only Sheriff in the Commonwealth of Virginia to attain the certification by the Department of Justice as a PREA (Prison Rape Elimination Act) Auditor
• Trustee at Good Shepherd Baptist Church in Petersburg, Va.
• Liaison for Security Ministry at Good Shepherd Baptist Church, Petersburg, Va.
• President of the Petersburg High School Boosters Club
• Past President of the Petersburg Kiwanis Luncheon Club
• Unanimously elected by all Sheriffs in Virginia as President (2017-2018) and is the currently the Immediate Past President of the Virginia Sheriff’s Association
• Elected as President of the Virginia Correctional Association-2016-2018; Currently, immediate Past President
• Formerly a Member and Vice Chair of the Petersburg School Board-2001-2005 (Resigned because elected Sheriff in 2005)
• Formerly unanimously elected as President of the Virginia Sheriff’s Institute
• Honored in the General Assembly-House of Delegates in 2018 with Joint resolution, HJ 274, in her honor and for her service.
• Vice-Chair of the Petersburg Task Force on Domestic Violence- 2017-present
• Selected for the Lifetime Achievement Award from the Virginia Correctional Association-2016
• Served 4 terms as President of the Petersburg-Dinwiddie Crime Solvers Board
• Named “Law Enforcement Officer of the Year” by YOVASO (Youth of Virginia Speak Out About Traffic Safety) 2013
• Selected as Allen, Allen, Allen & Allen Law Firm Hometown Hero
• Elected to serve on the Board of FeedMore, Richmond, Va. 2013-2018
• Received Medal of Merit for the National Sheriff’s Association "Sheriff of the Year" Award-2014, 2015, 2017
• Appointed by the Governor of Virginia, The Honorable Terry McAuliffe, to serve on the Criminal Justice Services Board- July, 2014; Reappointed in July, 2017
• Recognized by Petersburg Citizens as one of Petersburg “Superstars” August, 2017
• Organizing Petersburg Task Force on Domestic Violence Training Institute-October, 2016, 2017, 2018
• Organized the “Walk a Mile in Her Shoes” Event. A Men’s March Against Domestic Violence.,April 2017 April, 2018
• Organized first Autism Walk in the City of Petersburg, June, 2018
• Formerly honored with 2 resolutions in her honor for her dedication and community service from the House of
Delegates, HJ 332 and by the Senate, Senate Joint Bill 182.
• Featured in “O” Oprah Magazine as one of “12 Most Politically Unusual” in this country in 2012
• Awarded the Sojourner Truth Award from the Petersburg Club of the National Association of Negro Business and Professional Women's Clubs, Inc., May, 2018
• Appointed to Governor of Virginia’s, Ralph Northam’s Transition Team, 2018
• Achieved certification through the VSI Certification Program thus VSI Certified (VSIC). March, 2018
• Profiled by FOX TV, WRLH, in honor of Black Women’s History Month-April 2018
• Awarded the MAGNUS Leadership Award from the National Command & Staff College and the Criminal Justice Commission for Credible Leadership Development June, 2017
• Certified auditor for the American Correctional Association
• Received the Social Justice Transformer Award from the Community Transformers Foundation, November, 2019
​
*  *  *  *
From The Progress Index, February 17, 2020
Past VCA President Elected Officer of VALECO
RICHMOND — Petersburg Sheriff Vanessa R. Crawford has been elected third vice president of the Virginia Association of Local Elected Constitutional Officers.
​VALECO is the statewide association comprised of Virginia’s local elected sheriffs, clerks of circuit court, commonwealth’s attorneys, commissioners of the revenue and treasurers.
Sheriff Crawford was elected unanimously by the membership, assembled at the Association’s annual meeting held in Richmond on Jan. 27 to serve as the organization’s third vice president.
VALECO represents the interests of Virginia’s 625 elected constitutional officers, and their more than 16,000 deputies, in legislative and other governmental matters throughout the Commonwealth. Virginia’s five local elected constitutional officers date to colonial days, when the sheriff served the royally-appointed Governor of the colony and exercised broad responsibility for tasks from law and order, to administering elections, to collecting taxes. Direct election of these officers by the people of Virginia’s counties and cities evolved following American independence, with the offices of commissioner of the revenue and treasurer the last to become directly elected through changes introduced in the Constitution of 1870.
VALECO was organized in 1976, and for the past 45 years, has provided leadership on dozens of initiatives designed to enhance the quality of public service provided through these historic offices, which stand as a shining example of Thomas Jefferson’s vision of government that is close to the people.​